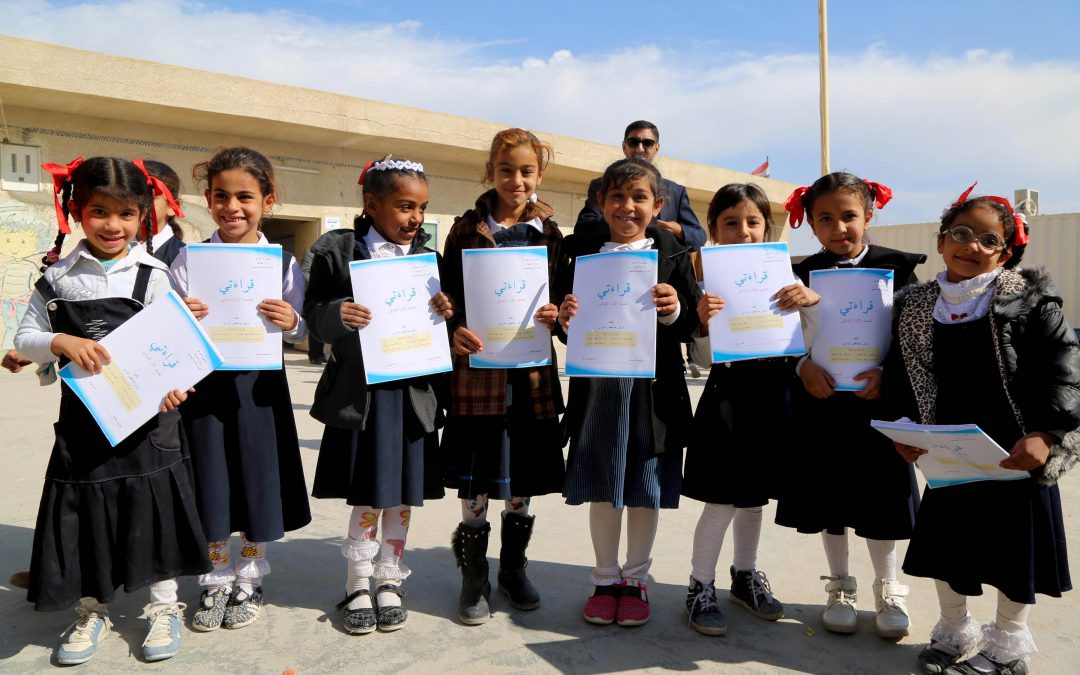 Thanks to some fantastic fund-raising support by staff at the Rumaila Operating Organisation (ROO), we were able to answer a request by the Directorate for Education to provide the books. Those needed for reading, Arabic grammar, mathematics, science and English are in seriously short supply, and many children are forced to share books between as many as five others, posing a substantial challenge to learning.

ISIS’ occupation of large swathes of Iraq and the current operation to liberate Mosul may have put northern Iraq in the spotlight, but southern Iraq remains in urgent need of humanitarian assistance. Years of political and economic instability have dramatically weakened the south’s economy: in 2015, more than 30% of the south’s population were recorded as living in poverty, compared to 13% of those living in Baghdad.

The region’s educational system has been a notable casualty, with many schools suffering from a lack of adequate facilities and resources, and many classrooms witnessing severe overcrowding. Girls have been particularly badly affected, with the lack of suitable facilities coupled with traditional views of girls’ education resulting in fewer than 50% of them attending school.

As part of our multi-faceted approach to strengthening struggling communities, AMAR has long been committed to improving the quality of, and access to, education for the region’s children. In 2012, AMAR participated in the ‘Educate a Child Initiative’, helping to integrate children in Basra’s education system, and AMAR’s new school for orphans is due to be opened later this year.

Now, thanks to ROO’s ‘Coffee Shop Fund’, AMAR distributed the books to both primary and secondary school children at six schools in the Al-Rumaila and Al-Khora communities outside Basra.

Presenting the new textbooks to delighted students, AMAR’s regional manager in Iraq, Dr Ali Muthanna, commented: “Every child deserves a quality education. Every child deserves the opportunity to learn, to imagine a future for themselves and their families and to reach for their dreams. Our mission is to ensure that every child is provided with the chance to do this.”

Speaking of the distribution, AMAR’s Chairman, Baroness Nicholson of Winterbourne, added: “While AMAR is currently providing first-class emergency aid to the victims of ISIS, we remain committed to our long term mission of rebuilding robust social infrastructure here in Iraq. Education is central to this. Distributing textbooks may seem to be a drop in the ocean, but it will make all the difference to children in this poverty stricken region.”