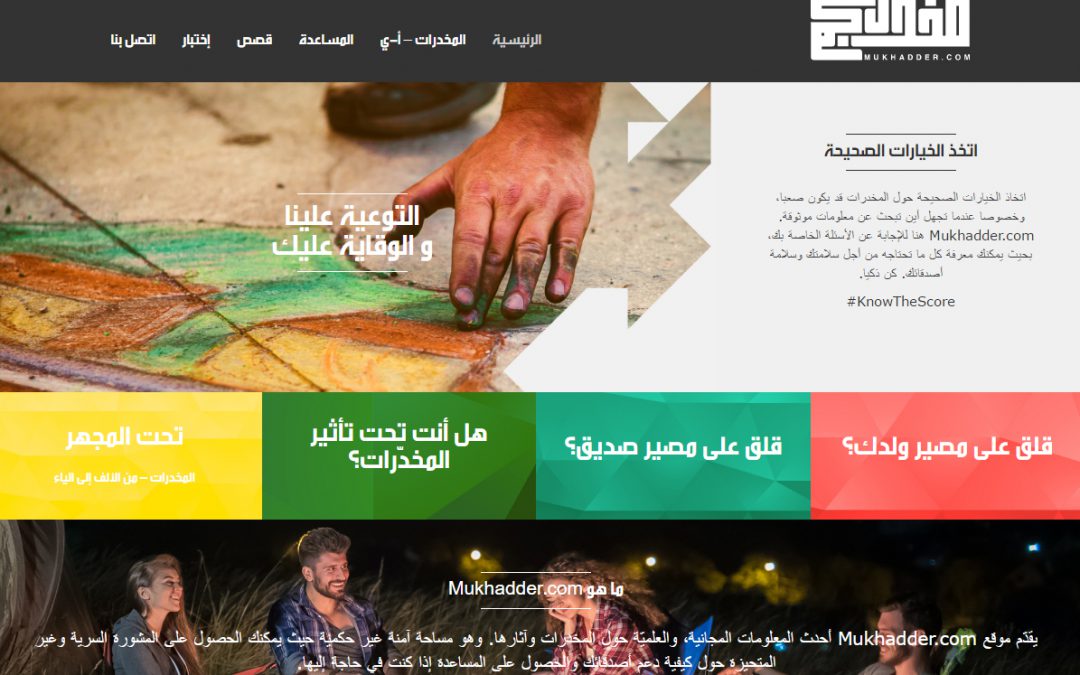 AMAR has launched Lebanon’s first multilingual online drugs awareness platform in the battle to stop substance abuse amongst a spiraling number of the country’s young people. Mukhadder.com provides a timely and vital platform to educate and empower youths to make the right choices, and to provide information on how to seek help.

In recent years, the illegal trade in drugs has hit an all-time high in Lebanon. The country has long been a centre for drugs – with the Beqaa Valley a key region for the cultivation of opium poppies and the production of hashish. The Syrian war next door, meanwhile, has resulted in an increase in drug trafficking across the Lebanese-Syrian border.

Drugs as a topic, however, remains a sensitive issue in Lebanon, and many parents and teachers avoid discussing it with their children and students. Add to this a lack of comprehensive, youth-friendly information about the consequences of drug use, and it is no surprise that drug abuse has risen rampantly, particularly among children and adolescents.

Once started, drug use often becomes difficult to stop: a brain nurtured on drugs can ultimately no longer operate without them, trapping users in a vicious cycle of addiction.

As 27-year-old Beiruti, Mariam, told AMAR earlier this year: “If I could have known that trying a joint at 17 was going to send me into a decade long addiction problem, then maybe I would have not taken the risk at the time.”

In an effort to curb drug use and help keep young people safe, AMAR has launched a brand new Arabic-English website and accompanying social media channels for Lebanese youths. Mukhadder.com provides accurate and comprehensive advice on the dangers of drugs in a neutral and youth-friendly format, as well as details of locally available support and treatment.

“I believe having a website such as ‘Mukhadder.com’ is crucial as drugs are so widely available in our country,” one viewer told AMAR. “We all have a friend of a friend who has all sorts of drugs, so it is really simple to get whatever you want. However we never know what we are consuming exactly… and we don’t really know the full effect it will have on us.”

AMAR has been working to tackle drug use amongst Lebanese youths since 2012, delivering interactive workshops in universities and schools on the risks of drugs and alcohol misuse. Now, AMAR’s vision is for Mukhadder.com to become the point of reference in the Arab speaking world for scientific, impartial and non-judgmental information on the risks of drugs.