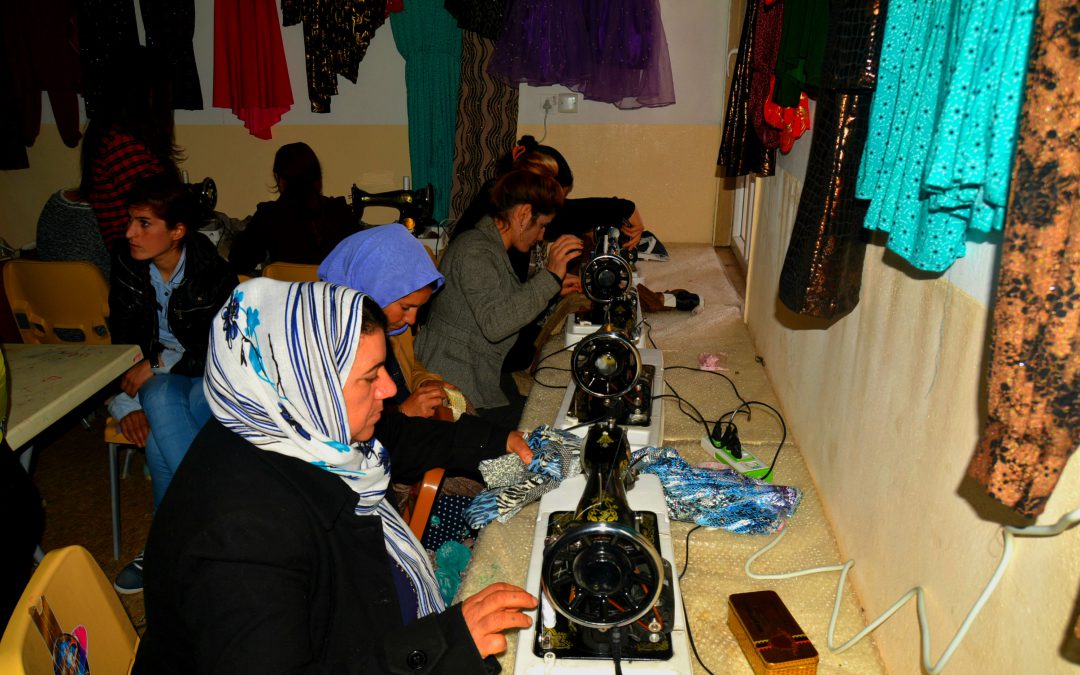 Two hundred kilometres separate Khadija Ahmad and Sundus Dawoud.  Khadija lives in Erbil, the capital of Kurdistan region of Northern Iraq.  Sundus lives to the north in Dohuk.  Although separated by geography, recent experience unites the two women: they are both IDPs (Internally Displaced People), forced to flee from ISIS militants.

3.3 million Iraqis have been displaced since the terrorist group captured huge swathes of land in 2014.  Forced to abandon their homes and livelihoods, many have escaped ISIS only to face poverty and unemployment in displacement camps and host communities.  More than 90% of IDPs are believed to be unemployed. Women with children like Khadija and Sundus are often the worst affected.  In the midst of a freezing winter and with children to look after, their vulnerability is intensified.

Despite the challenges they face as IDPs, both Khadija and Sundus have managed to find hope after their harrowing experiences thanks to the support and training they have received at AMAR’s ‘INVEST Centres’ in Erbil and Dohuk.

Khadija fled Mosul with her five children soon after Iraqi forces launched an offensive to liberate the city from ISIS in October 2016.  After dodging bombs and bullets to reach Erbil, the family are now living in rented accommodation.

Khadija found solace from the death and destruction she had witnessed in her love of arts and crafts.  “I have loved arts and craft ever since I was a child,” she told one of AMAR’s staff. “In Mosul there was so much death, so much destruction.  After seeing these things, I felt I had to keep creating.”

With five young mouths to feed, Khadija decided that she would turn her passion into a business.  Enrolling on a handicrafts course at the INVEST Centre in Erbil, she honed her artistic skills, learning how to knit and make accessories.  Now she is able to support her children with the money she earns from selling her creations.

Sundus and her family fled ISIS in 2014.  Since then, they have been living in a UN displacement camp in Dohuk.  Unlike Khadija, Sundus was unaware of her creative skills before her displacement.  But, realising that she had to support her family, she decided to enrol on the free sewing course at the Dohuk INVEST Centre.

“I had never even held a needle and thread before coming to the centre,” she said. “I was worried that I would not be able to do it”.  But her teacher, Berivan Hussein, saw her potential and gave her the encouragement she needed to overcome her apprehensions.

Sundus is now a skilled seamstress with big ambitions for the future. “Now I am running a small business from my house and supporting my family with the clothes I make.  My customers say they are very beautiful and that makes me happy,” said Sundus proudly. “But soon I want to open my own workshop.  I hope that my skills will allow me to become completely independent.”

According to the International Organisation for Migration, approximately one million have returned home.  But with ISIS clinging fiercely to Western Mosul, and leaving booby traps and destruction as it retreats from surrounding areas, it is unclear when Khadija and Sundus will be able to do so.  For now, their primary concerns are supporting their families and rebuilding their lives amidst war, displacement, and destruction.  Through our INVEST Centres, AMAR staff will be with them every step of the way.