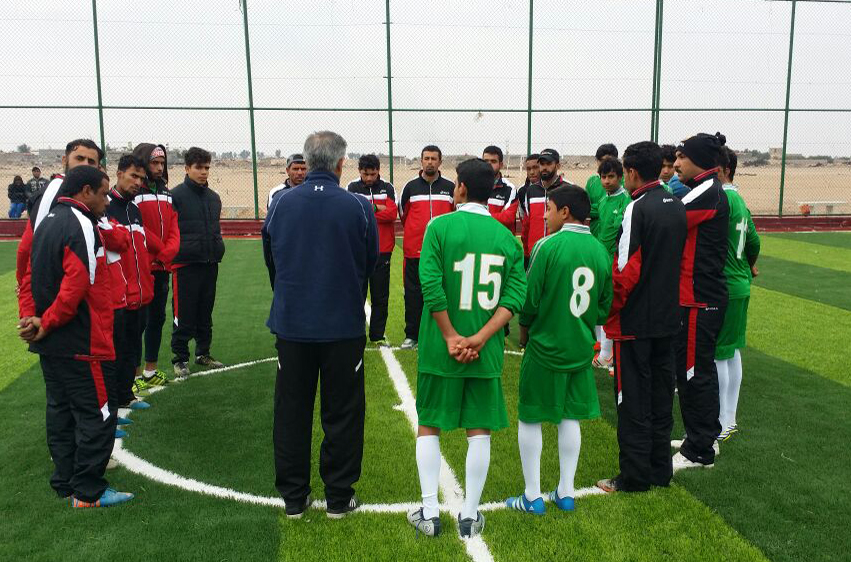 Scores of young Iraqis are now receiving top class football coaching and have the use of state-of-the-art all-weather pitches thanks to a joint project between AMAR, the Rumailah Operating Organisation (ROO) and Iraq’s Southern Oil Company (SOC).

Former members of Iraq’s national football team joined star league players, local dignitaries and politicians, at the opening of the two community pitches in the south of Iraq.

Communities living close to the new sport facilities in North Rumaila, say they are “absolutely delighted.” One local official said it was “the first time in as long as we can remember that somebody has done something for this community.”

Already the pitches are being used seven days a week and top-class coaching sessions is being provided to help bring the youngsters up to a good standard through a “train the trainer” package for aspiring young coaches.

The coaching staff is headed by Sadiq Alwohali, Founder of Football for Change (FfC). Sadiq developed FfC in 2006 to help create a new generation of players and coaches for Iraq
He holds the prestigious Level 3 English Football Association License and has worked for a number of famous Premier League teams.

Dr Ali Muthanna, AMAR’s Regional Manager, praised ROO and the SOC for backing the scheme so comprehensively. He said two more all-weather pitches would be added by the end of 2017.

“It was just wonderful to see so many people attending the opening ceremony from all sides of the community. Thanks must go not only to ROO, the SOC and to Sadiq Alwohali, but to some of Iraqi football’s most legendary footballers who were hugely keen to come along to add their support to this scheme,” added Dr Ali.

“The Iraqi people have had an extremely difficult time over the last few years, particularly in the areas that are not so well off, so it’s marvellous to be able to provide them with something like this. Hopefully we can find some great players who will one day go on to play in the Iraqi national side.