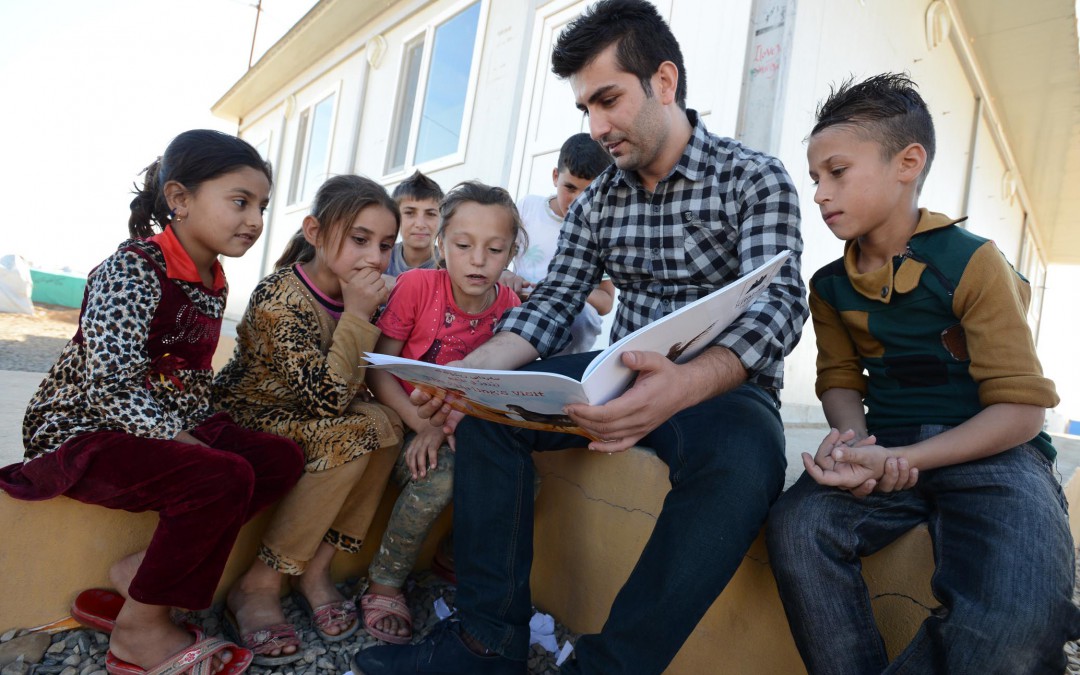 It’s early evening in Iraq. Zaid, a young father, returns home, empty handed, to his wife and small daughter in their tent in the Khanke refugee camp.  For 18 months he’s looked for work. Despite an educated background, he’s still unemployed, still living in the camp, and still unsure of his family’s future.

Half a world away, a group of Utah volunteers gathers to hear a firsthand report of that young father’s existence, and thousands like him, from a colleague just returned from visiting there.  The group comprises the Executive Committee of the Utah AMAR Supporters’ Circle.  AMAR (“Builder” in Arabic) is a London-based organization created to rebuild people’s lives shattered by civil strife in the Middle East. The Utah AMAR Supporters Circle’s mission is to assist the more than 3 million Iraqi refugees displaced from their homes, and to further utilize a partnership created less than two years ago with LDS Charities.

An April gala on the Circle’s agenda will include an appearance by AMAR’s founder, Baroness Nicholson of Winterbourne.  The baroness founded AMAR in 1991 to address the appalling needs of Iraqis displaced by Saddam Hussein’s wars.  Ongoing strife in the Middle East–particularly in Iraq–continues to define AMAR’s mission today.

AMAR crossed the ocean to Washington, D.C. 6 years ago, establishing a presence in a bid to engage American assistance to the cause.  How it hopscotched from there to Utah is just short of a miracle.  But miracles are expected in an organization that builds health clinics and training centers, provides emergency aid, and supports 4 refugee camp health care centers, serving tens of thousands. It provides urgent healthcare services to stable, under-served populations in dozens of mobile health clinics and posts throughout Iraq, employing local people and goods for all projects and services.  AMAR also offers educational opportunities. “We have a program that teaches the basics of reading, writing and math,” said Jim Olson, a retired colonel living in the D.C. area.  Olson brought AMAR to Utah in an unexpected way.

Retired from the US Army Medical Service Corps, Olson saw his share of humanitarian medical work.  He met Baroness Nicholson in 2008 at a Department of Defense conference in DC where she described the humanitarian work AMAR had accomplished with DOD funding.  “This wonderful lady gets up and starts talking about all these principles–self sufficiency, keeping families together, democracy, teaching morality, education needs, helping people–she inspired the whole conference. I was mesmerized,” Olson said.  A Utah Mormon, Olson added, “It resonated with me because of my church teachings.” 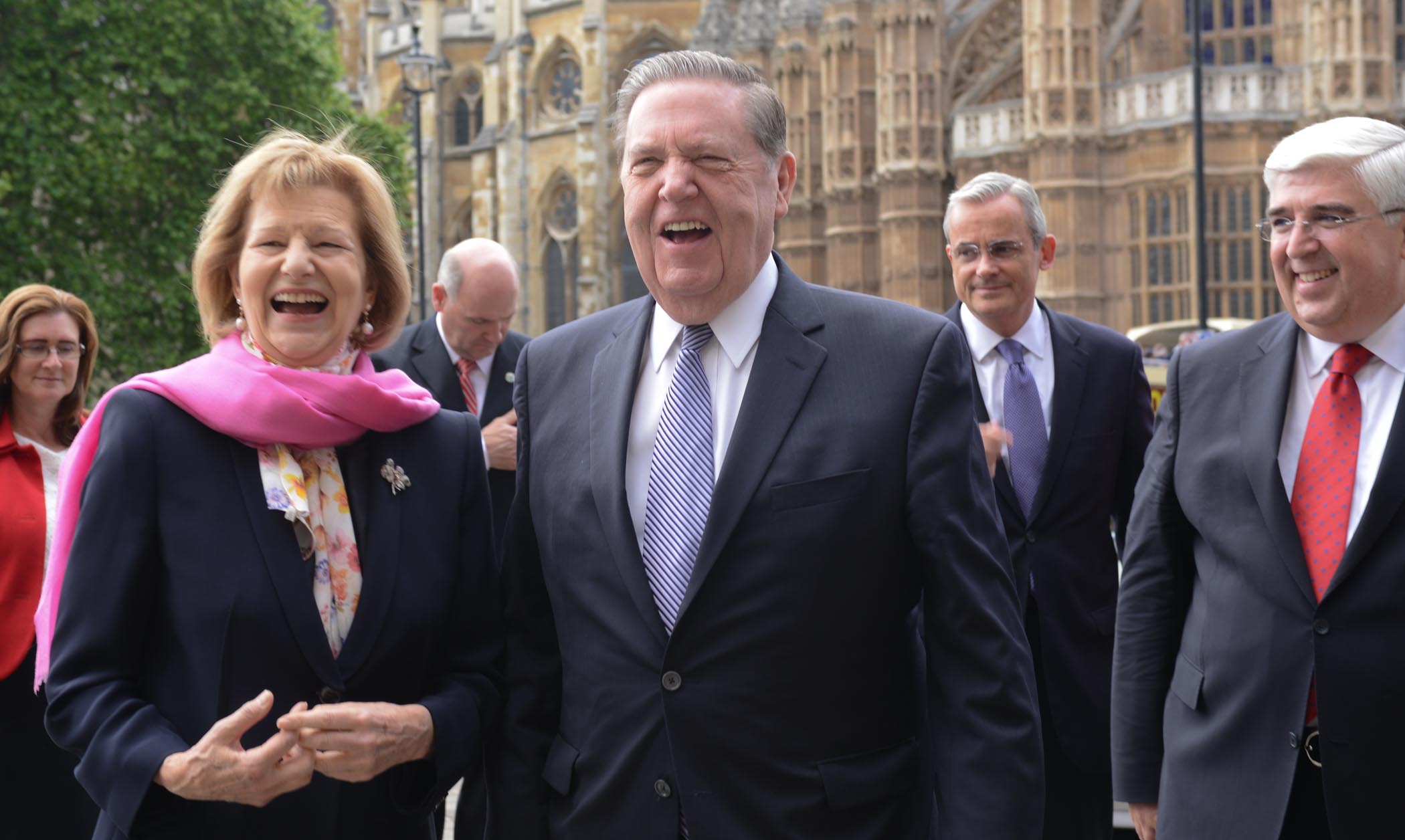 Olson approached the baroness to thank her for her comments. And then, “I said, ‘I’d like to invite you to Salt Lake City to see what the LDS Church is doing with humanitarian aid.’ It was a simple statement, word for word,” Olson said.

After a startled pause, the baroness accepted.  “It was a total surprise to her to be invited to Salt Lake to meet with a church she knew little about,” Olson said.

Baroness Nicholson’s Salt Lake visit in 2010 included meetings with key church leaders whose like interest in humanitarian aid eventually led to a funding agreement between AMAR and LDS Charities, solidified by a Memorandum of Understanding.  She formed friendships with several church leaders including Elder Jeffrey R. Holland, whose assignments include the Middle East. In the years since, with the help of the Utah AMAR Supporters’ Circle, she has addressed key Utah groups to represent AMAR’s mission. And, at her invitation, Elder Holland addressed parliament’s All Party Parliamentary Group to explain how humanitarian aid helps offset religious conflict–the first time an LDS apostle has addressed that governing body.

The AMAR and LDSC partnership has provided neo-natal resuscitation kits and training, wheelchairs, and the construction of 2 health centers and 2 training centers. The Utah AMAR Supporters’ Circle has seen fruits of their labors and the LDSC agreement, and are strategizing to do more.

Emily Stevens, AMAR’s regional manager and only Utah salaried employee, was managing a small BYU library when Jim Olson invited her to help coordinate the Supporters’ Circle. She was hired to the cause a year later as the scope of their efforts grew. She visited Iraq last November where she toured refugee camps with LDS Charities Director Sharon Eubank, and Jim and Karyn Anderson, LDS service missionaries from Farmington serving in Kurdistan, Iraq.

Stevens’ firsthand account was both encouraging and sobering.  Two health centers, one under construction and one completed, were funded by LDSC.  She visited a recently constructed training center where refugees learn skills to bring them closer to self-sufficiency. And she learned more about a joint effort to put into the hands of refugee children a book designed by an art therapist to help them process post-traumatic stress.  Jihad, a father of a 3-year-old girl, said the book changed his traumatized daughter, adding it was the first time he’d seen his child act like a child since they were driven from their home.  “That’s a powerful way that a life was touched by the joint work of AMAR and LDS Charities,” Stevens said.

Emily Stevens, center, AMAR’s Utah Regional Manager, gathers friends and stories during a recent visit to Iraqi refugee camps aided by AMAR and LDS Charities.  Several of those friends still communicate with her.

The Yazidi camp Stevens visited houses 20,000 people. Another estimated 20,000 live outside the fence to utilize camp healthcare services.  “And then everywhere you go across the countryside, there are little tents and shelters taken over by someone displaced,” Stevens said.  “I was overwhelmed by what 3 million people who’ve been driven out of their homes looks like,” she said.

Stevens visited with some of the refugees, including a recently widowed mother, her 10 children, and their children’s children, all living in three tents.  “It was heart breaking. I couldn’t help but think how hard it would be to keep your dignity when living in this condition, and when your people are targets of genocide,” she said.  When Stevens asked a young adult what her hope for the future was, she answered with one word: “Safety.”

The refugees’ plight resonates deeply with Utah AMAR co-chair Gary Free.  “The Middle East crisis is the largest social crisis in Europe since World War II,” he said.  “A lot of us here in Utah come from pioneer heritage.  The pioneers suffered greatly. This is a similar event but more extreme, not only in pain and hardship, but in vast numbers.”

Free proved his dedication to the cause in an unexpected way.  Jim Olson invited him to attend an initial meeting to discuss fundraising. “Someone found out I’m a race car driver, someone else discussed the idea of a fund raising event at Miller Sports Park, and instead of walking out of the meeting casually involved, I was at the center of organizing the first event,” he said.

The goal was $50,000 to help with a wheelchair donation LDS Charities was lining up. Free and others on the committee met the challenge: an evening of dinner, entertainment, and paid laps around the track with race car drivers yielded their goal.

That was rewarding to Free, but not enough.  He and other circle members created a successful gala last year that brought together Baroness Nicholson, LDS church leaders, and others willing to help AMAR’s mission.  “It’s a cause that counts,” Free said.  “AMAR is the most effective charitable organization to help Middle East refugees in their own area.  There’s a lot of hope that people can stay in their country.  These are decent people in life threatening situations. AMAR saves lives.”

Plans are underway for the 2016 Gala, scheduled for April 21st. Baroness Nicholson will attend, as will many others.  Free’s call to action is simple:  “Call us. Serve. Make a contribution. Get involved in the gala, and attend it.  Learn about AMAR and what it does. The good thing here is we are all capable of doing something to help.”

Emily Stevens agrees.  “We’ve watched a lot of lives blessed by this work. AMAR makes a difference, one life at a time.” 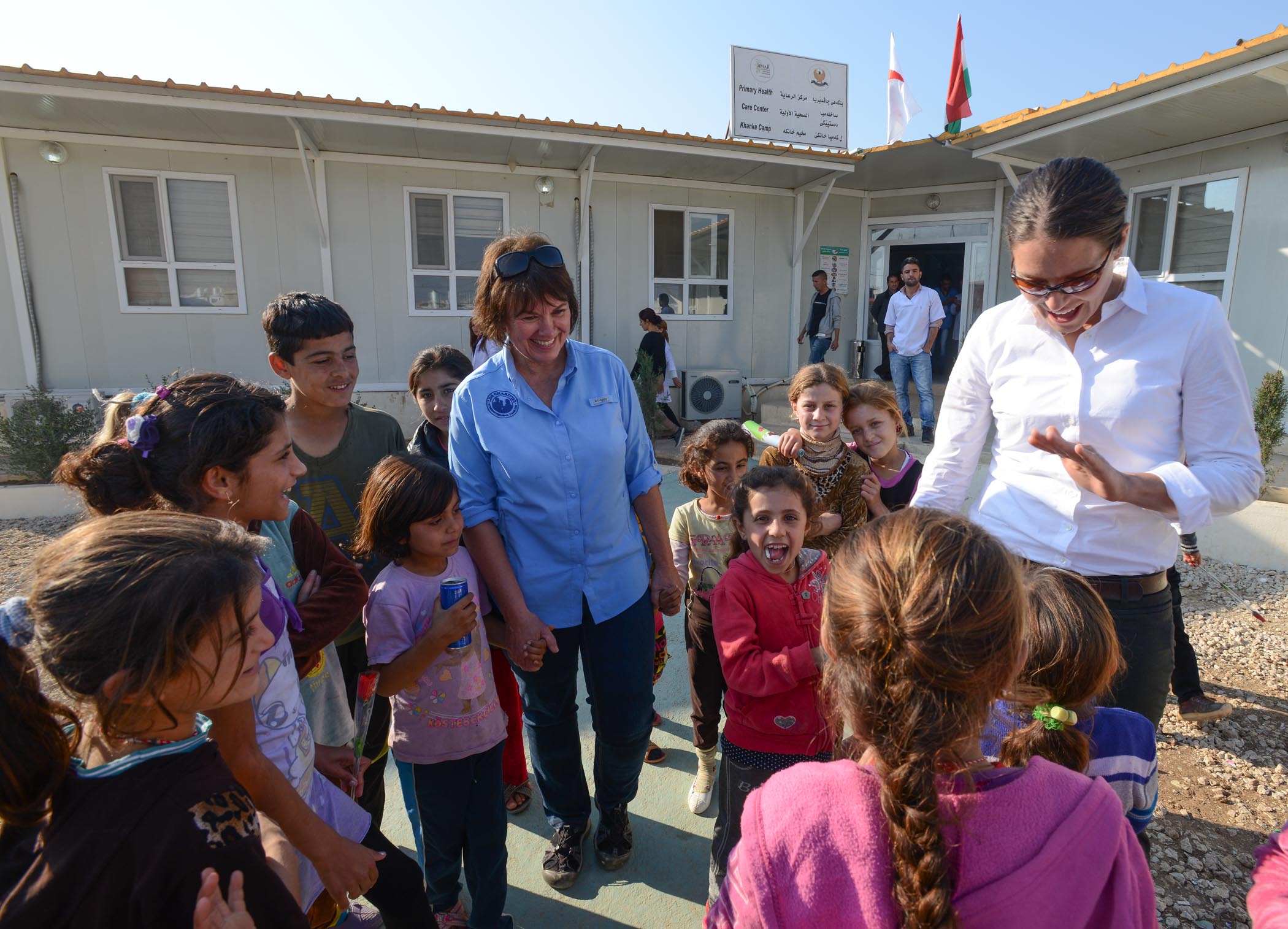